ABOHZIS, or the army’s sorting hat

I cannot remember much of how I ended up fulfilling my military service, except that I very much would have liked not to.

As the oldest of three brothers, it was clear in the mid-1980s that I would have to go. The rule was that a third (and fourth and so on) brother would get dispensation. My youngest brother had been talking about a carreer in the army, but he purposely wouldn’t join before I had done my bit. A dick move, I thought, but largely irrelevant it turned out, as he ended up staying away from the army.

I don’t remember the age at which I was called in for the obligatory preliminary physical and mental check-up, but I am guessing I must have been 16 or 17 years old. The place was an army base in Roermond, Limburg, in a building that had what I can describe in no more detail than old-office-feel. We had to undress in front of a doctor who poked and prodded us, we had to read eye charts and listen to beeps, and we had to take part in an interview, of which I mostly remember being asked what role I wanted to play in the army if I ever were to be called up.

This last bit was something that had already been asked on a form I had to fill out in the run-up to the check-up, so I repeated that I wanted to be an officer or an NCO. This sounds strange for somebody who did not want to be in the army in the first place, but the way I figured it was that if I had to go, I might as well make the most of it.

The reputation of the Dutch army for putting the right people in the right place was pretty bad; trained nurses becoming cooks, trained cooks becoming engineers, trained engineers becoming chauffeurs and so on. I don’t know if that reputation was well-deserved, but anecdotes were rife.

During the check-up one was scored along ABOHZIS: Algemeen (general physique), Boven (upper body), Onder (lower body), Horen (hearing), Zien (sight), Intelligentie (intelligence), and Stabiliteit (mental stability). The scores given were 1 (good), 3 (adequate) and 5 (inadequate). Scoring a single 5 meant the army had no use for you.

My mother told a story about her brothers (or so I seem to remember), about how she drove the older one, gung-ho to perform his service, to the army base while collecting the younger one who had done something so that he would be discharged. I guess I could ask either of them what happened, but I fear the story might lose in the telling.

At some point I must have received a message that the army thought me fit to become cannon fodder, though not in those words of course. That did not mean that it was certain I would be called up. Some years there were more young men available than the army needed and then they would not call you up.

In order to apply for alternative service, you had to state that you had serious conscientious problems with being in the army. And to prove this, you had to give an interview in which you stated your objections. The way this had looked to me was that you basically had to tell the interviewers that you were a pacifist, which sounded all very tree-hugging hippie to me. A pacifist to me was somebody with Ghandi-like qualities who would stand back while his house was burnt down and his family murdered.

Then there was the alleged nature of alternative service. The way I heard it, I’d have to clean toilets for seventeen months, or wash old people. If there were a war, I don’t think I would raise arms against an enemy. I could not see myself do this. But performing military service is not the same as going to war. The way I looked at the conundrum was one of the amount of time wasted versus the way that time was wasted. And my choice then was clear – if I were to be called up, I’d sit out my 14 months in the army.

It turns out, or so it was explained to me much later by members of a foundation that helped conscientious objectors, that playing the saint would have been detrimental to one’s classification as a conscientious objector, because it sounds like a lie. People who would say in their interview that they would turn the cheek no matter, would find an invitation to come to dress in olive on their doormat.

Here is how it has been explained to me since then what happens to hard core objectors who wouldn’t or couldn’t perform alternative service. They would either cut their losses and acknowledge the invitation, or they would stay at home the day they were supposed to report for duty. Then a week later or so, the military police would come and collect them and drive them to an army base where they were given some trivial order, like ‘sweep the floor’ or ‘do ten push-ups’. If they refused, that would count as disobeying a direct order. The objector would be arrested and brought before a military court, where they would be sentenced to 1 year in prison.

In the end I did get called up. I received a letter telling me that I was going to be a gunner in the artillery, the least impressive of the fighting arms. I was not going to be an officer or an NCO. My slender frame, resulting in an ABOHZIS score of A3, might have had something to do with that. The letter did not give a reason for me being sorted in the artillery, but it did tell me to report for duty on a freezing Monday morning, which I did.

Fourteen months in the army provided me with plenty of glimpses of promising exits. There was the discharge of the guy who seemed to have upgraded his mental stability score from S1, healthy, to S5, looney tunes. I do not know how he did that, but him consistently calling the wachtmeester (artillery sergeant) ‘sir’, despite having been told numerous times not to, was part of his rich mental tapestry.

Then there were the many cases of unspecified back problems which seemed to get the army shaking in its boots, presumably because it feared having to pay life-long disability pensions. In most cases, claims of back problems were solved with a doctor’s note stating that gunner so-and-so was no longer allowed to lift shells.

After I finished my fourteen months, I started talking to conscientious objectors who had performed or were performing their alternative service. It turned out they all had cushy desk jobs with charities that, contrary to army life, actually prepared them for life and gave them something to put on their resumes. The exceptions were conscripts who at least had gotten their driver’s license or Russian studies out of it.

A lot of the above is memories of conjectures. I don’t really know how the Dutch army selected and assigned its conscripts in the 1980s. Normally I would double check what I write in a blog post to see that it is factually correct, but my goal with this post is to have it be a witness report and nothing more. 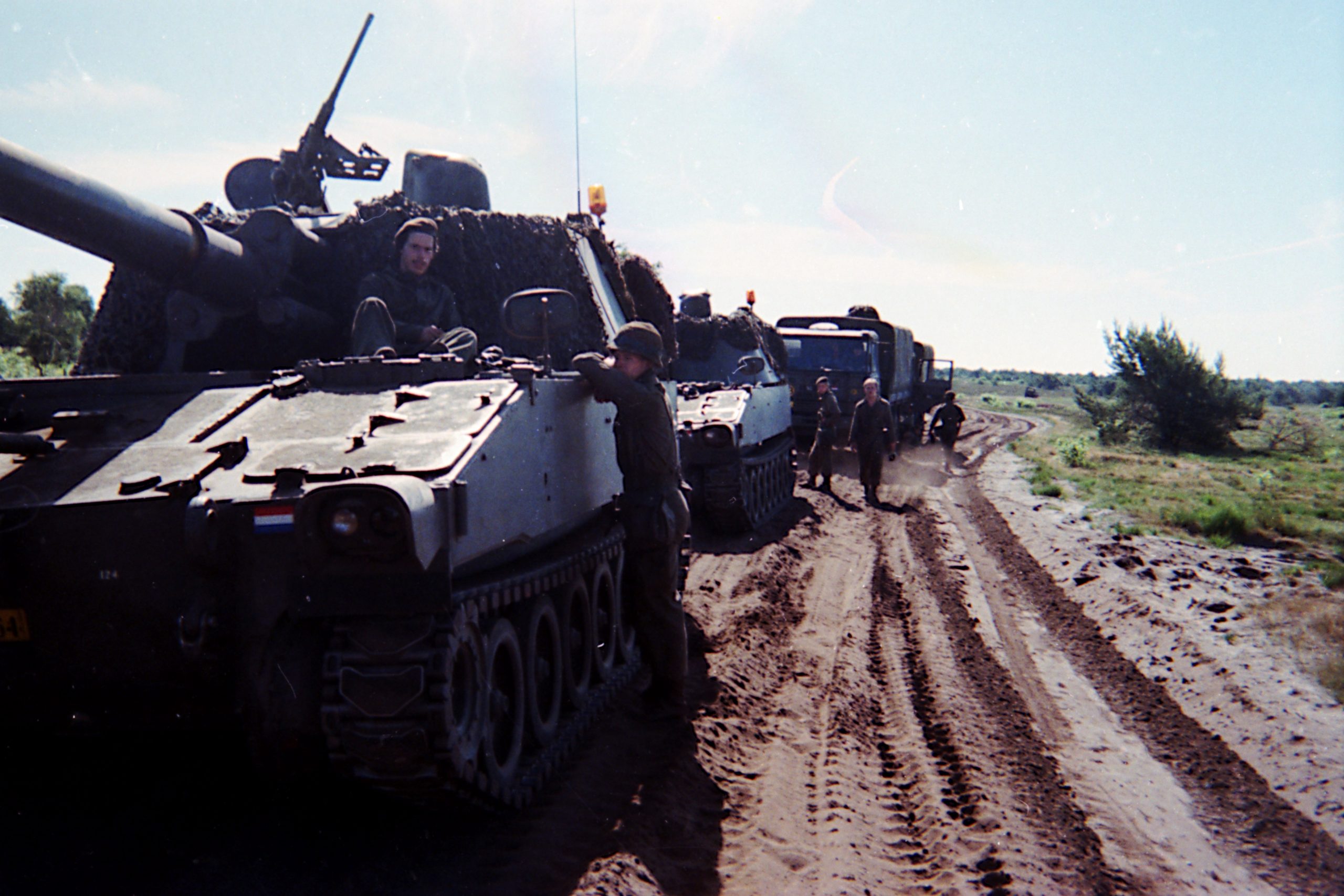 This entry was posted on Monday, August 9th, 2021 at 3:23 pm and is filed under Life blog. You can follow any responses to this entry through the RSS 2.0 feed. You can leave a response, or trackback from your own site.