It started with this 2014 Commodore 64 demo music by Pex “Mahoney” Tufvesson. If you were to follow that link (please come back!), you would hear an indiscriminate collection of bleeps and grunts. You will have to take my word for it that these bleeps and grunts are in some ways better than any assortment of bleeps and grunts that came before on this machine.

It was a bit like coming across a band that you had thought had split up in the nineties, but not only were they still together, they were producing some of their best music ever. Stumbling upon the retro computing scene was a very pleasant surprise.

And it turned out there was a lot more to it than late advances in SID programming technology (SID is the name of the sound chip in the Commodore 64).

Until then—then being a few weeks back—I had thought the retro scene was mostly about looking back – like in 2008 when Martijn Koch built this interpretation of the 1971 arcade game Computer Space – or about carefully preserving a couple of machines while spare parts were slowly dying out.

Turns out there is quite a bit more to it.

You could consider the FPGAs as blank silicon upon which you imprint the hardware from a long ‘dead’ 8-bit or 16-bit computer by loading that design from an SD card. The Mist FPGA even has two Atari joystick ports, as were used on Atari and Commodore computers in the 1980s, and a MIDI interface. Quite frankly at about 250 euro (300+ if you want your computer preloaded), that’s a sexy bit of kit if you don’t mind me saying so.

Sometimes games programmers use their skills (and our modern knowledge of old computers) to right old wrongs. The 1984 port of the Ghosts ‘n Goblins arcade game did not contain all the elements of the original, so last year somebody turned that old port into a version that appears to have everything from the arcade game (see screenshot). 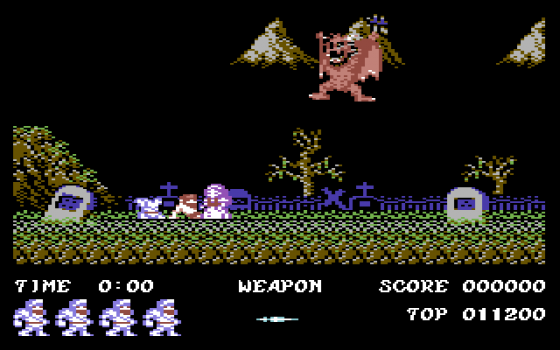 The Amiga’s birthday party wasn’t just held in Amsterdam, there were parties in Germany, the UK, Australia and USA (and more?).

So why are people still using these old machines and in some cases even returning to them? The reason is no doubt nostalgia. Computers back then were manageable. A single person could know what was going on in a MOS 6502 and share that information with others.

And also we now have the internet and we have development tools that we can use outside the target machine. I started coding a little in my Commodore 64 emulator, first using the slow BASIC language, then after I got frustrated switching to assembler (using JASM). If I were to do this programming on my old 64 (which is stashed away somewhere in the attic), that would be quite cumbersome. I’d have to save and load intermediate versions of my program from and to tape and that would take quite a while.

But I can now use my much faster Windows machine and the superior developer tools I have on it to do my coding; testing is just a matter of loading the result into my emulator.

What is more, groups of developers can use git repositories to share their code and chat rooms to talk to each other. Information not only gets stored inside programs, but gets shared between developers. (To be honest, both the 8-bit and the 16-bit computers had wonderful, dedicated magazines which also contained a lot of knowledge about how to develop for these devices, including the Dutch Amiga Magazine for which I wrote as a freelancer.)

Finally, knowledge gets added to. If you check the “8-bit hackers” link above, you can see at the start of the talk the difference between how well the Commodore 64 was understood at the beginning and at the end of its 10-year life (which, by the way, is an insanely long time for a single model to be produced).

This entry was posted on Wednesday, February 10th, 2016 at 2:21 am and is filed under Life blog, Link blog. You can follow any responses to this entry through the RSS feed. You can leave a response, or trackback from your own site.