Who owns this photo? 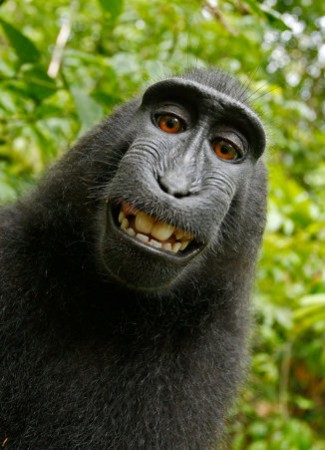 Every time Englishman David Slater threatens to sue people over this photo, the press jump on it like rats on a granary.

I will tell the story therefore in just a few words, because you’ve probably already heard it. Slater goes on a photography trip to Indonesia, a macaque starts to play with one of his hugely expensive cameras and starts taking selfies. Zoom forward a couple of years and Slater seems to have changed his career from taking pictures to threatening people with lawsuits over using this photo.

(I expect he didn’t actually do the latter, but the only times I ever hear about him is when his legal team are ready to pounce.)

A couple of observations following the current brouhaha involving Wikimedia. Note that I am mostly responding to what internet commenters say underneath the articles—pretending anything an internet commenter (not you, of course!) has to say has intellectual merit, is a risky affair.

1) It pains me to see the way people take for granted how anything that is created, is owned by someone. The public domain, that area of human culture that is owned by all of us, used to thrive, and used to be a natural thing that existed as a peer alongside the area of things that were owned by individuals. These days the public domain seems to be a memory distant enough that people no longer realize the possibility of there being things that are owned by all of us.

That makes this a great era for copyright lawyers and no-one else.

2) Among all the arguments on whether this photo belongs to the world, to Slater, or even, as some would have it (cheekily?), the macaque, the thing that has been missing is a mention of the legal doctrine of sweat of the brow. People seem to argue that the picture should belong to Slater because he did all the hard work. Regardless of how questionable the assertion is that Slater did any work at all, for an argument like that to hold up in court (and Slater is indeed threatening to take this to court), it needs to have legal underpinnings.

The sweat of the brow doctrine states that if you put in a lot of work, you get a copyright. It partly adds to and partly opposes the much more common doctrine that holds that work needs to have some sort originality embedded into it in order to generate a copyright.

The Wikipedia article tries to list the jurisdictions in which the sweat of the brow doctrine applies but doesn’t get far. In the Netherlands and the USA for instance, the doctrine has been soundly rejected in the jurisprudence. In the Netherlands it is said (figuratively) a work requires “the stamp of the maker”, in other words it needs to be clear that the work is the result of choices its author made. (Generally these choices need to transcend the merely technical; setting an aperture on your camera or cropping a photo on your computer generally is not enough to cause a copyright to come into being.)

The one jurisdiction that seems to be the exception is … the UK, Slater’s home land. This is where things start to get interesting, because if Slater is going to sue anywhere, it’s likely to be the UK. Some commenters seem to think that since the Wikimedia Foundation is an American entity, it can only be sued in the USA. I’ll leave it is as an exercise for the reader why that is utter nonsense.

P.S. The rotten thing about writing these things is that you read so many sources that eventually you stumble upon the one that makes your points for you. Here that source is TechDirt, the site that knows about this case because it is the site that initially got attacked by Slater’s representatives—or maybe they’re just smart people.

This entry was posted on Friday, August 8th, 2014 at 12:11 pm and is filed under Copyright. You can follow any responses to this entry through the RSS feed. You can leave a response, or trackback from your own site.