Last Saturday was the first time ever King’s Day was celebrated in the Netherlands, but nobody had to teach us anything because the festivities were built atop a string of a hundred Queen’s Days in as many years.

The part of the celebrations that I tend to go for is the country-wide flea market and every year, or almost every year, I tend to post a photo of my loot here. This year will not be an exception. 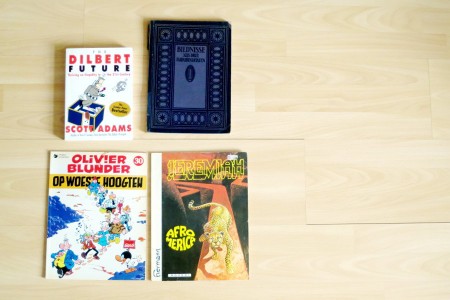 If you compare my acquisitions to those of 2012, 2011, 2010 and 2008, the harvest seems rather paltry. If you take into consideration that three of those books were the token purchase a retail addict makes in order to get started on a bender, the result seems even measlier.

But that is because this year I took separate photos of the things I bought (above) and the things I did not pay for (below). Here are the results of this year’s dumpster dive: 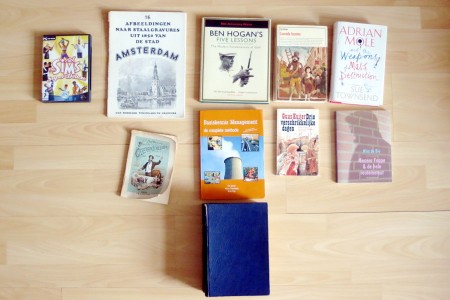 It’s this dumpster diving schtick I want to talk about for a moment.

Despite coming from relative poverty when I was young (or perhaps because of!) I have to overcome a distinct distaste every year for rummaging through the garbage. A few things ease my mind. First of all I am a bit of a pack rat and seeing good things go to waste offends my sensibilities. There is also the idea of getting a good deal, strengthened by the fact that in the earlier hours of King’s Day I payed good money for items of similar value. By the time the vendors start packing up I have developed a fairly keen sense of what everything would have gone for that day. And finally there is also the realization that the treatment of books I find by the side of the road or in actual dumpsters hadn’t been treated much better during the day—many of them were displayed on the ground or on raggedy blankets while passers by dropped hot sauce from sausage buns on them.

Still, when I get home from dumpster diving I feel an itch everywhere (imagined, I presume) and immediately go to work with soap and water to wipe off the books I found.

The friend who accompanies me on these hunts remarked that I probably wouldn’t have bought the books I took home from the dumpster dive and in most cases that seems to be true. There is a classic Dutch dictionary in there, the Dikke van Dale, that I would have presumed to cost more than I would have been willing to pay for. I probably would have bought the Lisa Tetzner because The Black Brothers is one of the few books in a global canon of children’s literature—I’d like to re-read it. I might have left the Adrian Mole unbought for the simple reason that I couldn’t be 100% sure I did not already own it—on the other hand I bought a Raymond Chandler (the only find not pictured in the photos above) figuring I might already own it and it turned out that indeed I did.

But all the books I found while dumpster diving will get read or used eventually, I am pretty sure of that. The older books are the most obvious example of this truth; they are out of copyright and I acquired them so that I could scan them and put them on Project Gutenberg or on the Internet Archive.

I noticed that during the part of the day where I was still willing to pay money for books, I spent most of my time looking for ‘certs’, for books that I knew I would enjoy and for books that have been on my to-buy-if-I-run-across-them list. This year for the first time I have also been looking for photography books—without finding any. The dumpster diving objects are slightly more of a gamble, although my experience the past four years with dumpster diving is that most of these will be read or used otherwise.

This entry was posted on Monday, April 28th, 2014 at 1:37 pm and is filed under Life blog. You can follow any responses to this entry through the RSS feed. You can leave a response, or trackback from your own site.