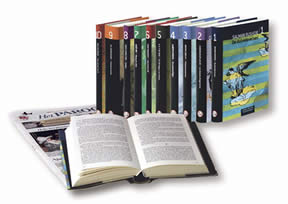 I was going to blog about this earlier, but wanted to find some info about newspapers publishing books, which has become quite fashionable recently. Unfortunately, my Google skills wax and wane with the moon, and I couldn’t find anything. From what I remember, the trend of newspapers publishing books started in Italy (?) and became a quite profitable side-line (?) for newspapers who were otherwise experiencing declining sales (?) in an era in which shopping for printed news has become so much easier (?). If you know more, please help me out here.

The pause gave me some time to think. The ultimate act of censorship, as you know, is called copyright. Copyright allows its owners, typically publishers, but sometimes authors (and in the case of Mein Kampf: governments) to stop distribution of a book. Is that bad for the book? In some cases it is. But more explicit censorship, as in the case of the ten books listed before, also makes publication an attractive proposal; who wouldn’t want to own forbidden fruit?

Where copyright may succeed in burying unpopular ideas is with ideas that would have been unpopular anyway; boring ideas, for example. But I don’t think anyone would want to ban boring ideas, because they tend to ban themselves.

Still, now and again explicit censorship escapes the radar even in somewhat interesting cases. For Project Gutenberg I helped salvage an early edition of “De Zoon van Dik Trom” (Dick Drum’s Son), which was censored by the Nazis during their occupation of the Netherlands, and which according to a website called Verboden Boeken (forbidden books) has not been restored since. I’ll have to check and see one of these days if that is still true.

Dik Trom is (the hero of) a series of children’s books that has remained popular for well over a century. The stories are about the adventures of a village boy with a stubborn slant. Slightly picaresque, but not as much as Tom Sawyer or Pippi LÃ¥ngstrump, it is nowadays considered harmless fun. The second book of the series was censored by the Nazis because Dik’s son Jan and his friends had a snowball fight in which they divided up into two camps: the “Dutch” and the “Germans”. The reasons for that choice were simple: the Germans were considered an acceptable alternative (remember: this was before the two Great Wars in which the Dutch perception of their friendly neighbours changed considerably), and because a German black-white-red flag could easily be mimicked by the turning the Dutch red-white-blue upside down.

And of course, in the heat of the battle kids yell things like: “Away with the Germans! Long live the queen!”

A more infamous example of a censored work that is no longer being reprinted is of course Adolf Hitler’s Mein Kampf, which is actively being censored in Europe using copyright law. Apparently our glorious leaders believe that undesirable ideas easily infect the mind of a simple minded person. I guess it takes one to know one.

This entry was posted on Sunday, August 6th, 2006 at 12:36 pm and is filed under Black Book, Copyright, Project Gutenberg. You can follow any responses to this entry through the RSS 2.0 feed. You can leave a response, or trackback from your own site.