Google’s featured snippets algorithm is quite smart, at times

As a I was trawling through the statistics for this site, I noticed how popular my post about creating rounded corners with The Gimp is.

I mean, I knew it was popular, it is the post with by far the most comments on this blog, but I did not know it outperformed other posts by an order of magnitude.

And one reason, it turns out, is that Google heaps mountains of love on that post for search phrases like “gimp rounded corners”. In fact, my post is presented as a featured snippet for that phrase (without the quotation marks), meaning that not only is it returned as the first search result, but it also receives a special presentation that makes it really stand out (see illustration). 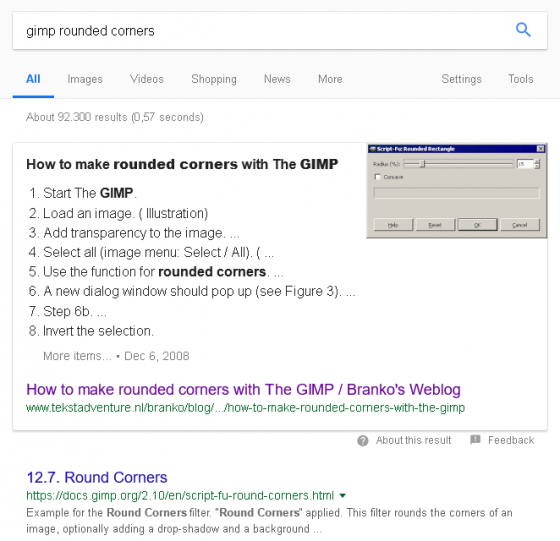 But what I find most remarkable is how Google’s algorithms managed to extract a numbered list from the way I did it. Not so much that they translated “Step 1” to just “1”, but that they realised that labelling things “step” is one of a myriad of ways one can present a list. 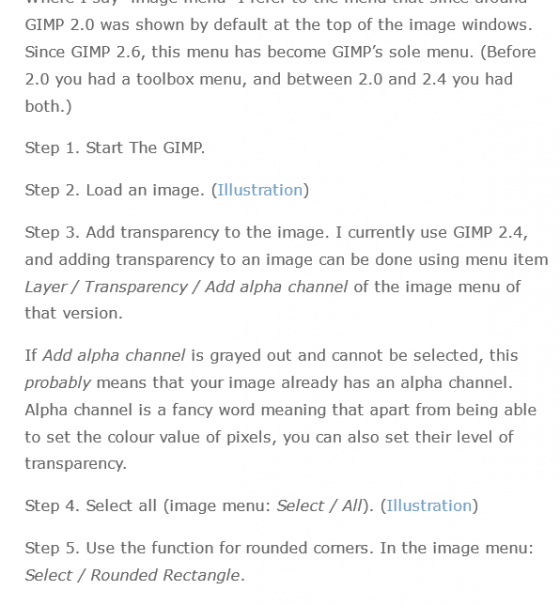 Also note how the algorithm automatically skipped my intro. (That is not just smart, that is wise.)

A customer once asked me if I could make a tool that would take a person’s resumé, regardless of how they had formatted it, and extract all relevant information from it in a structured manner. I said yes, I can do this, it is pretty much what I have trained to do in university, and an optimistic estimate for my time would be about 18 months.

This upset the customer no end, because they thought a week and a half, tops, was what was needed.

I hope you see the similarities between the two projects, and assuming I know my stuff, a lot of work must have gone into the Featured Snippets project just to make it feel like it works most of the time. Things can still go wrong with search snippets (says a Google blog post from January this year). People will inject their tutorials and explanations with their own personality and opinions, which on the whole must be a good thing, except that sometimes these personalities and opinions are of a rather unsavoury type. “How to torture puppies” is not a tutorial healthy people would like to see boosted by Google.

Google must have seen their Featured Snippets feature as just one way of organising search results in a manner that is most helpful to its users, but a ‘naive’ visitor may see Google giving certain results a pedestal, and that is a valid interpretation. (Certainly the SEO world appears to be eyeing search snippets with a greed that belies the mere interpretation of Featured Snippets as ‘superior presentation’.)

This entry was posted on Friday, November 16th, 2018 at 1:34 pm and is filed under Web design + usability. You can follow any responses to this entry through the RSS feed. You can leave a response, or trackback from your own site.