Adventures of an oxygen hog

This is a tintinologist essay I wrote in Dutch in 1996. Upon rereading it I noticed that I didn’t feel too ashamed about it, so here it is again in English. Enjoy.

The role of Captain Haddock in Destination Moon

Those who follow the adventures of the young reporter Tintin and his dog Snowy will soon notice a certain development in the series. The main character starts out as a lone warrior in the battle against evil. Then slowly new characters enter the series, first as comedic obstacles, later as friends. Tintin’s own role changes through these acquisitions, as he becomes the clean cut foil to the other characters’ cheeky antics.

The most important representative of these new characters is Captain Haddock. He is Tintin’s closest friend, and the two become almost inseparable. Indeed, many of the stories start with the pair following each other into danger. After his introduction in The Crab with the Golden Claws the captain plays an important role in all of Tintin’s adventures—the stories up to and including The Secret of the Unicorn acting as a sort of warm-up period.

Haddock has undoubtedly become the most popular character of the series. Tintin himself is drab. As the hero of the stories his behaviour must be impeccable, and acceptable to most readers. With such a cardboard character, the introduction of colourful extras to keep the series lively was almost inevitable. Captain Haddock, an old sailor, turned out to be the character that author Hergé could relate to the best.

One of the most important adventures that included the captain—or rather, one of the most important adventures for the captain—is Destination Moon (part one of a two-parter). Destination Moon started out as a straight-forward action adventure, the first to be written by somebody other than Hergé, but in the end Hergé decided against this approach and made the book a rocket building manual.

Everybody is of course familiar with the scene in which the captain accuses Professor Calculus of “acting the goat”. This leads the furiously indignant professor to drag the captain from rocket factory installation to rocket factory installation, dragging the reader along on what otherwise would have ended up a chapter sized info dump. Through the captain’s experiences the reader gains an excellent insight into the complexities of space travel. 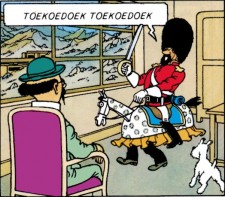 From the moment Hergé decided to make the rocket building process the focus of an adventure, he had to figure out how to turn a boring technical description into the sort of thing his readers expected of him. Captain Haddock was the ideal vehicle for this. The man does not want to go to the moon. He wants to sit at home (a castle no less), smoke his pipe, drink his favourite Scotch, and at best worry about things like how magicians turn wine into water.

But Captain Haddock is also loyal to his friends Professor Calculus and especially to Tintin, and if said cabin boy wants to go to the moon, he, Archibald Haddock, can hardly let him go alone, can he? And thus Hergé uses Tintin to take the captain along in an impossible and otherwise boring adventure. And in the same way the captain is loyal to Tintin, so are the readers to the captain. The audience for a technical documentary was created.

The choice for Captain Haddock as the eyes and ears of the reader is an obvious one. Tintin is like a robot. Not only is it to be expected that he requires a lot less explanation (Captain Haddock on the other hand simply isn’t interested in space travel), but he also wouldn’t refuse a trip to the moon if his creator ordered him to. 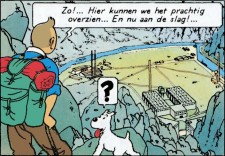 The price Hergé (and Tintin) had to pay was a surprising one. A hero has to take the back-seat in his own series! Captain Haddock takes centre stage. Hergé even goes as far as forcing Tintin out of the main story. Tintin leaves the rocket plant for a hike through the mountains, supposedly to get some fresh air. He will take care of the espionage story that despite being important, and tailor-made for Tintin’s heroic bent, plays in the background. This way Captain Haddock temporarily ascends the throne in a believable manner—he has Tintin’s permission.

The captain is of vital importance to Destination Moon. His cynical, distant humour captures the attention of the reader, and transforms a serious subject into something light and airy.

I wondered if the importance of Captain Haddock could be measured in some way. I came up with the following methods:

The first method has the disadvantage that you just postpone the moment where you make the judgement call of what is important and what not.

The second method at least comes with a (implicit) definition of importance, but that definition is not necessarily correct. The spy story in the background for instance is terribly important to the story. If the spies had succeeded in bringing the rocket down, there would have been no part two—or more likely, part two would have looked completely different. And yet the spies hardly appear at all in the book.

In the end I cowardly decided to let you, the reader, choose whether you want to draw any conclusions from the quantitative part of this essay.

The following table was created by counting the number of panels a character appears in.

Captain Haddock appears on almost as many pages as Tintin (55 and 54 respectively). The number of panels sporting the sailor however is nearly 25% more. This phenomenon occurs, as far as I am aware, in no other Tintin book.

As an aside, during my counting exercise I noticed that one time Snowy appears in two different places at once. The week before the final launch, the astronauts are gathered for a wrapping-things-up meeting. Snowy is present. When the plant’s general manager, mister Baxter, asks how things are going, Professor Calculus replies that almost everything is done, except Snowy’s space suit. The ‘camera’ then cuts to another scene in another location, in which we see Snowy act in a five panel joke involving his space suit.

Such cutaway scenes are perfectly valid in comics (or any other type of story) though, so perhaps this is not a mistake by Hergé, who otherwise was always the perfectionist.

This entry was posted on Saturday, May 14th, 2011 at 6:05 pm and is filed under General. You can follow any responses to this entry through the RSS 2.0 feed. You can leave a response, or trackback from your own site.