Angus Croll wrote a couple of Javascript programs that calculate a fibonacci series, each program in the style of a famous literary author. Cool stuff.

I just loooooove Queen’s Day. Don’t ask me to self-analyse why, there are probably some deep-hidden anxieties that show themselves through me rooting through other people’s garbage, and I just don’t want to know. (In my defense: Parson’s Pleasure.) 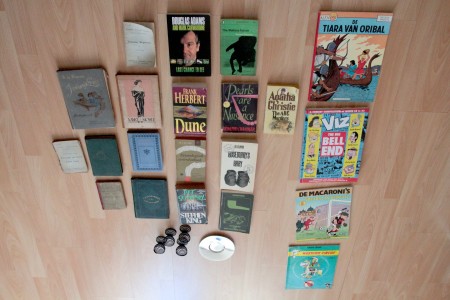 Shown in this photo is the stuff I bought. Bought is the wrong word. Acquired.

To the left are 8 books I hope to be able to use for Project Gutenberg. To the right are 9 books for myself. I note in passing—I only saw this just now myself—that it’s all mind candy this time. Another one for the shrinks.

Then there are 4 comic books. No, I’ve never read Viz, but it featured large in the computer mags I read as a young geek. Colour me curious.

Finally 4 egg cups (I keep breaking the earthenware ones, the ones shown here are nice and metal), and a shiny metal saucer that I bought mostly to use as a sort of reflector thingie for macro and close-up photography.

I had hoped to find some photo gear this year, but struck out. I had not planned on taking home many books, as a lot of the books I bought last year remain unread till this day. But such are the weird contortions of fate that I actually got more books this year than last.

When I said that ‘bought’ was the wrong word, I meant that almost half of this stuff was found dumpster diving. In fact, we only dumpster-dove a small part of the route we walked earlier this April 30, as we were fairly tired. I am pretty sure that if I limit next year to dumpster diving, I’ll still be a very happy camper.

This is cool: a company called Lytro is taking orders for its plenoptic (or ‘light field’) consumer photo camera, which it expects to ship in 2012.

A plenoptic camera swaps spatial (2D) information for distance information. See it as a grid of thousands of miniscule-resolution cameras all pointing straight ahead, with software combining the miniature photos back into a single exposure. (You used to have something similar in analog called a Lomo camera, but since that lacked the sophisticated software required to make something of the extra information it recorded, it was basically something only used for the cool effects.)

The extra information can be used to focus on a specific plane or object, to remove objects or visual artefacts, to create stereo images and many, many things more.

As they say, a grainy, shaky Youtube video with an idiot acting the straight man can say more than a thousand words:

(See also this for a demonstration of more applications.)

But because you’re swapping different types of information, you also lose a lot of information. I read somewhere for instance that the Lytro uses a 20 megapixel light sensitive chip to get to a 1 megapixel image. The result is that this type of camera will be mostly useful for photography where you cannot or will not control the setting. The Lytro will be used for snap shots, where otherwise you would use a regular (read: slow) pocket camera and miss the funny face your toddler pulls. Other uses of similar cameras would be surveillance (where beforehand you don’t know which details are important), or medical imaging where you want to separate planes of say tissues or cells.

So I was thinking: what if you put both a regular sensor and a micro lens array with a dedicated sensor in the same camera? Now, you would not want them to occupy the same space, but as it happens the ‘camera’ (Latin for room) has plenty of space, and many professional cameras use a mirror to reflect the incoming light to a viewfinder. If you’re building a mirror camera using an electronic finder, you could put the micro lens array in front of the viewfinder’s light sensitive chip.

This method does of course also have its draw backs in the form of trade-offs. You could not use this for video for instance, or anything else involving most forms of motion. What my idea solves is mostly an engineering problem. It transforms a problem of unknown variables to one of mostly known variables, which means throwing a lot less cash at the designing the camera and allowing a manufacturer to be early to market.

In which Rice Rocket takes a Slay ride

My friend and co-blogger (over at 24 Oranges) Natasha has taken up roller derby, an all-women’s full contact roller skating sport. I have come along to a couple of games, and I am here to tell you that roller derby rocks.

The basic game is simple. Two teams of five women skate around a smallish oval. One woman on each team is the designated scorer, the so-called ‘jammer’; the other four are blockers. (The blockers of both teams combined are called the pack.) The designated scorer must overtake the pack to score points. The blockers of the opposing team must prevent this. (The pack must stay together.)

To make things easier for everybody involved, the jammer wears a big star on her helmet. In the video below you see a blocker called Beyonslay successfully stop a jammer called Rice Rocket

Ah, yes, that is another aspect of roller derby, it is also about show. The contestants wear kinky outfits (not always noticeable among the safety gear), wear fightin’ make-up, and have cool names (which are officially registered to avoid duplicates). I definitely encourage you to check out a scrimmage (unofficial match) or a bout (official match) if you have the opportunity.

The following video I shot myself during a bout between the Essen Devil Dolls (red) and the Amsterdam Derby Dames (black). In the first ‘jam’ you see Amsterdam jammer Monstah Megs start alone, because the opponents’ jammer is on the bench for a foul.

Take On Me a-capella version by UMD Generics

A couple of years ago I posted a few seconds of an a-capella version of Aha’s eighties monster hit Take on Me AS SUNG BY PICKLES, and … you know? Youtube just keeps on giving.

Turns out this version was not made by pickles in jars, but by a group called UMD Generics, and their website lets you download all their albums.

This story about painted statues makes me happy for some undefinable* reason:

Call them gaudy, call them kitsch, but archaeologist Vinzenz Brinkmann insists his eye-popping reproductions of ancient Greek sculptures are right on target.

Do check it, if only for the pictures (there is a gallery).

*) Not really, I am just too lazy for introspection. A lazy guess though: any confirmation that the other, whether separated from us in time, space or skin colour, is basically the same as us, a grand human being… well, that is just a nice confirmation.**

These painted statues have that effect because despite themselves the garish colours do sort of bring the statues alive and pull them into the future. I could have a beer with these ancient Greeks, if they weren’t so damn ancient and hadn’t been so dead for so long.

**) That sounds too sappy, does it not? Well as I said it was just a guess.

It appears Iceland have gone full circle now that the ash cloud has penetrated the banking system. That is to say I have already heard reports about how people claim not to be able to pay their bills because of EyjafjallajÃ¶kull.

From what I understand in days of yore North Americans would blame El NiÃ±o for everything, as attested by Plume Latraverse:

You must check out Flight of the Conchords

The Grammy and Emmy they won failed to put them on my radar, so I may be late to the game. I just discovered this New Zealand duo that writes and sings funny songs. If you don’t know them yet, I urge you to check them out. I have spent hours on Youtube Wednesday night just playing all their clips.

Think Asylum Street Spankers, but leaning more heavily on the comedy aspect and with a far greater eye for a finished product. With the ASP it appears to be more about the performers having fun. I’d be curious to know how they’d mix, though.

My favourites so far:

The Americans liked these guys so much, they gave them their own show (only HBO, though). I’ve set my internet video recorder for it. The first clip is of one such episode. It would appear that they are repurposing their songs for these shows, but so far I feel it only worked for the LotR song.

This is too important to just leave to my browser’s bookmarks. I just found this absolutely marvelous online dictionary of narrative mechanisms called Television Tropes & Idioms. Despite the name it is not just about TV, but about story telling in all mediums, including games. And every definition I’ve encountered so far is absolutely spot on. And in discussing devices and twists it makes mincemeat of the opinions of producers (“the punters only like happy endings“) and viewers (“they can’t bring back Joe, his brains are scattered over three continents and a small asteroid called Katie”) alike. 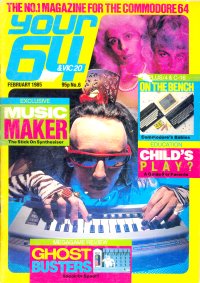 Lately, people have been mentioning St. Trinians, a comic strip about a public school for very bad girls, which made me remember Your 64. Reading this dayglo magazine for teenage boy owners of a Commodore 64 at a time when I was indeed a teenage boy (mid nineties) helped my English grades shoot through the roof. It also featured two slightly naughty ads.

The British computer mags at the time regularly ran an ad titled St. O’Trinians! for a game called The Secret of St. Brides. In it you see a teenage girl in school uniform, and you get to look up her skirt! 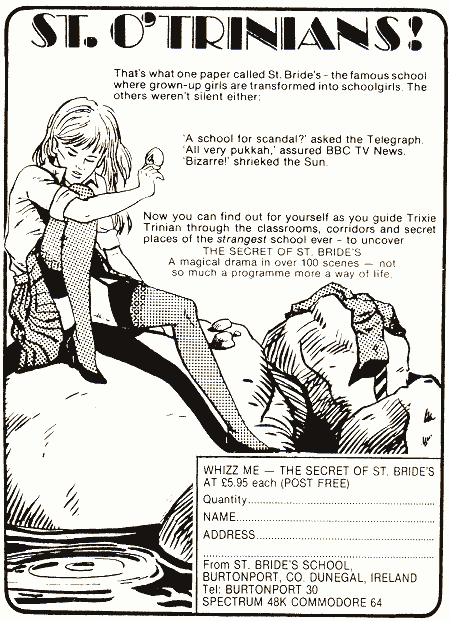 And a school friend and I could recite entire lines from the Albert Battersby ad!

(These were by far the raunchiest ads run in the magazine’s short life. It’s in the nature of boys to remember only these.)

I never knew until two weeks ago what St. Trinians referred to, although it was obvious that the ad for St. Brides referred to some knowledge the Brits or perhaps even all Anglos shared. Then I read the BoingBoing story about the comic and saw a BBC bit about the movies, and I knew.

And what was it the ad talked about? The internet will just not shut up, and so now I know that St. Brides was an early theater weekend mansion slash software house. As the ad says, St. Brides is where grown women go to play public school girls from the Roaring Twenties. When the owners first saw a computer, they decided that they wanted to write games too. So they got a copy of the Quill, and wrote a text adventure set at their “school.”

The ZX “Speccy” Spectrum version of the game is now available at Baf’s.