Use Google to find your freelancers instead.

Jellow is a platform that connects freelancers with their clients.

Clients post a description of the work they need done, then Jellow looks in its database for matching freelancers and asks them to pitch.

When I first checked out Jellow, the thing that stood out is that they seemed to treat freelancers as first class citizens. That in itself was remarkable, because none of the other main freelance marketplaces in the Netherlands for professionals of my kind (web developers) do.

Neither Hoofdkraan nor Freelance.nl are particularly freelancer-friendly. Freelance.nl seems to mostly want to keep recruiters happy and Hoofdkraan is quite pricey for the bargain basement contracts it delivers.

So I registered with jellow.nl and decided to keep an eye on the platform for a year to see how things were going.

Here is what I found so far.

My first impressions were positive. Jellow works by building a large and intricate profile of the freelancer and then letting software match those profiles to contracts.

Jellow also stresses the importance of having a complete profile, and if you have a rich Linkedin profile, Jellow will try and import that and use it to enrich the freelancer’s Jellow profile.

The website’s interface is clear.

Jellow actively encourages you from time to update your profile. I realise this is all automated, but it still signals intent: Jellow is not interested in stale profiles.

Over the past year I have been invited to respond to five or so contracts, which is not a bad number.

This, though, is where my overall positive opinion of Jellow started turning sour. The contracts were generally poorly defined. It appeared that clients (who unlike those on freelance.nl, where the freelancer pays, are the paying parties) were not spending a lot of time assessing and then describing their own needs.

Once I had read the contract, I generally still did not know what it was about.

Later, Jellow implemented a feature (which even later still seemed to have been removed) that showed how many freelancers were invited to respond to a contract and this showed where the real problem lay. Often I was one of 80 or 90 freelancers who had been invited to respond to a contract, meaning that there would be no meaningful way to pitch. I would just be one of dozens trying to guess the client’s needs and if I was lucky, I would guess right.

Like freelance.nl, Jellow used the buckshot method to try and bring freelancers and clients together. If the freelancer and the client decided to build something together, it would have to be entirely after the online marketplace brought them together.

Which raises the question: why use a marketplace at all? Freelancers can be found on Google, on Twitter, in Facebook groups, in professional Slacks (pro-tip: DrupalNL for finding Drupal specialists), through business relations and so on.

One of the first things I noticed, because I looked for it, were the negative Google reviews Jellow was getting from clients. It appears that charging 500 Euro for one search combined with not vetting the freelancers does not a happy customer make.

Business found themselves quickly burning through money by finding fraudulent freelancers through Jellow and the platform charging them for the privilege.

To me, however, this signaled that for once a platform was treating freelancers better than clients, and I had not experienced such a thing before, so that made me mildly optimistic.

But as one reviewer said (and I paraphrase): save yourself a lot of money by Googling for your freelancer.

So… I don’t know what Jellow is trying to achieve and maybe it will get better in the long run, but for now I will have to give it a 2 out of 5 for effort. 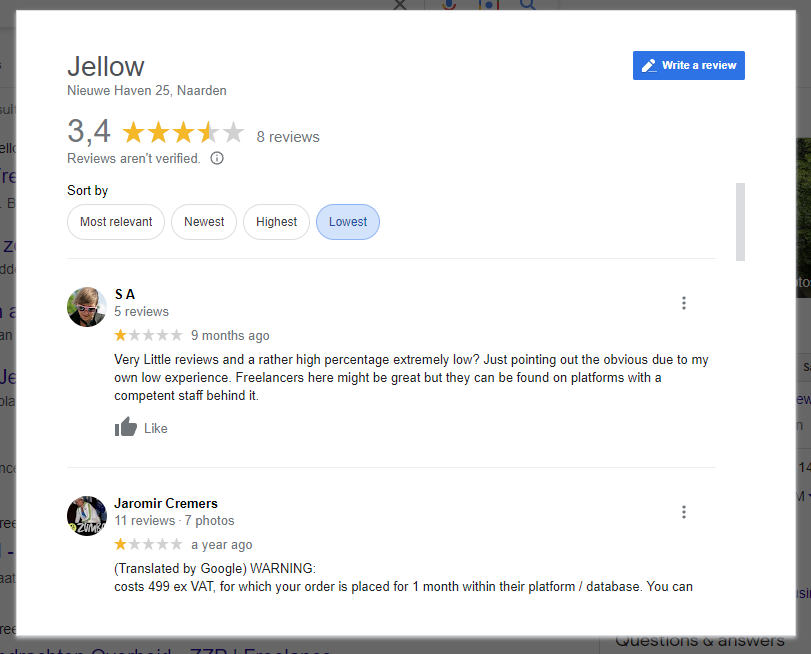 This entry was posted on Tuesday, November 8th, 2022 at 4:24 pm and is filed under Review. You can follow any responses to this entry through the RSS feed. You can leave a response, or trackback from your own site.