The most boring sport, Formula 1, is using Youtube to get better

I am not going to lie—when I watched Formula 1 in the 1990s, it was mostly because my fellow countryman Jos Verstappen was enjoying a moderate amount of success in the sport.

And when I started watching it again in the 2010s, it was because Jos’ son Max was entering the same sport, heralded as a great talent.

Formula 1, the fastest sport on earth, has a reputation of excess. Fast cars, beautiful women (not as drivers, unfortunately), cosmopolitan cities, and money and champagne flowing richly. Regardless of how deserved this reputation is, the sport itself, when you have stopped looking at everything that surrounds it and sit down to watch a race, is … often a complete snooze fest.

A Formula 1 race is started by the driver who proved himself to be the fastest during the qualification session a day earlier, followed by the second fastest car and so on.

The result is that the line-up on the starting grid is a pretty good predictor of not just who is going to win, but in which order the drivers will finish. Formula 1 races are often little more than glorified processionals.

It is true that the starting grid does not always predict the results. During the race, drivers will meet with accidents and mechanical problems that may throw them back a few places or even remove them from the race; teams that are good at qualifying, which requires being very fast for just a few laps, don’t always manage to bring that same performance for an entire race (‘race pace’); cars are required to pit at least once, which allows for undercuts and overcuts; and there are a thousand other small ways a race can be won or lost–and the fans know what these are.

That makes Formula 1 a (somewhat) enjoyable sport for the initiated. If you know what you are watching, if you can recognise all the tell-tale signs that something special is going on, if you know the ramifications of details as they unfold in front of you. But that also means that in order to get to like Formula 1, you must already be heavily invested in it. And most people start the other way around; they learn about a thing because they like the thing.

Formula 1 has taken to Youtube to remedy this is as good as they can. In good essasying tradition almost, they will extensively show you before a race what is going to happen, they will show you the race as it is happening, and then afterwards they will explain to you what you have seen.

Over the course of the two weeks between races, you can expect to see the following:

After the race, Formula 1 will publish a video of race highlights and then the recurring features return:

And then there are videos that aren’t tied to any specific race, but that do work well in explaining how the sport works. In the past month or so we had:

(I cannot embed these videos here, so I have linked to some of them above.)

All these features make it so you can get initiated in the sport in your own tempo, which makes it easier to enjoy the sport even if some of the races are, on the surface at least, boring. 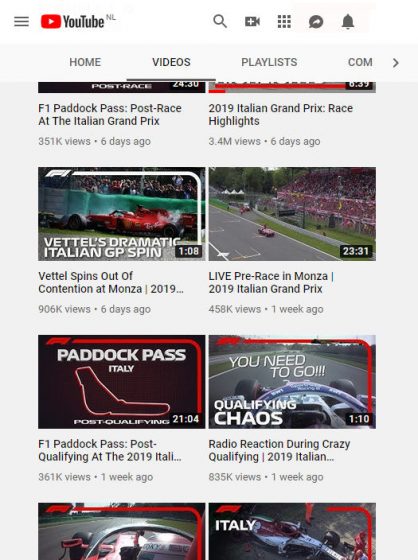 This entry was posted on Sunday, September 15th, 2019 at 4:42 pm and is filed under General. You can follow any responses to this entry through the RSS feed. You can leave a response, or trackback from your own site.