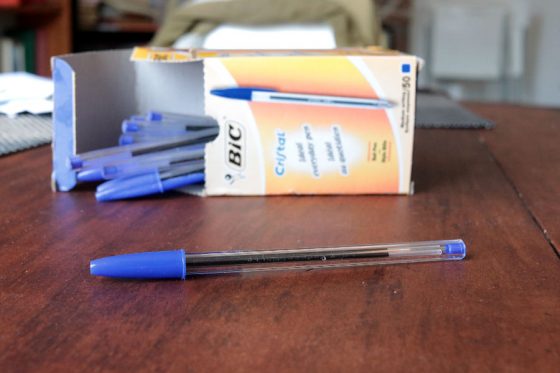 (An Experiment and a Fantastically Boring Tale.)

In 2011 I bought 50 pens in an attempt to stem the constant trickle of pen disappearances.

Like matching socks, ballpoint pens have this obscure, almost life-like ability to get lost just when you need them, and this seemed to be a good reason to buy way more pens than one man could chew on.

Last week I took a fresh pen from the box, because all the others had disappeared, and it would barely write. Dried up. I tried another from the box. Dried up. And so on.

So the result of this experiment is that a man can live on 28 pens before he must replenish.

A couple of caveats:

Now for the good news: according to this selection of life hacks, you can bring a ballpoint back to life by using it to ‘write’ on rubber (for example, the sole of a shoe), and I can happily say, this works.

This entry was posted on Wednesday, April 11th, 2018 at 5:07 pm and is filed under General. You can follow any responses to this entry through the RSS feed. You can leave a response, or trackback from your own site.