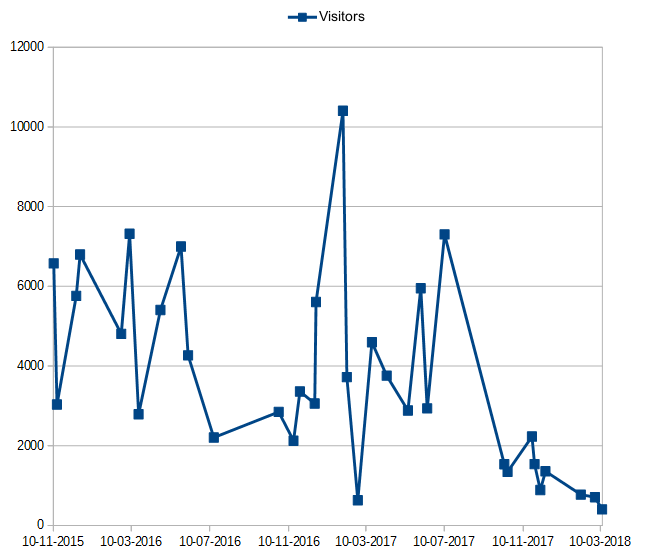 Here is one for the books.

This is a graph of the so-called ‘reach’ that my roller derby photography page has on Facebook. Reach means: how many people have been exposed to my photos. (In an earlier blog post I explained why I have a Facebook page in the first place.)

Every dot represents the reach of a post in which I introduce a new photo album to this page.

There are two things that stand out from this graph, both which are remarkable for reasons I will explain below.

The first thing you will notice is the up-and-down nature of the graph. One time I reach a lot of people and the other barely any at all, but — and here comes the second anomaly — before the autumn of 2017, “barely any at all” still meant more than 2,000 people reached. Since late 2017, reach has dropped into the hundreds.

This is strange because of the way I work. I visit roller derby games on the weekend, prepare an album containing photos of a game the day after and then post the album, containing a few dozen photos, to my Facebook page. Usually the players and sometimes their friends and family will look at the fresh album and that is that. After a week, nobody except a few fans of very popular players, engages with the album any more.

In other words, my status updates are limited to the same type of thing over and over again, and although the specific audience changes per game, the expected size of the audience is always the same — namely friends and family of two teams of skaters.* This should be reflected in my reach, but it isn’t.

If anything, my average reach should increase slightly because more and more people ‘like’ my page.

When my reach was still in the thousands, I wasn’t overly concerned about the up-and-down nature of it, because I was still reaching most of the people who would be interested in my photos. When it dropped into the hundreds however, I started to worry a little.

“Over the past few months, I’ve read articles and answered questions from many people who are concerned about declines in organic reach for their Facebook Pages”, wrote one Facebook employee in 2014 in an article titled Organic Reach on Facebook: Your Questions Answered. Let’s see what he had to say.

There are basically three reasons why reach would drop over the course of time. The first is that more and more updates are being shared each day, the second is that people ‘like’ more pages than they did before and the third is that Facebook won’t show everything.

In other words, whenever I share a photo album, Facebook shows it to less and less people over the course of time, and the more people like my page, the fewer people get to see its fruits.

Facebook does this, it claims, so that it can keep people engaged. If people have too many things of little value to look at, they will get bored. So Facebook prefers to present people with content of high value.

And then he bowls that entire edifice over by saying that companies can buy views for their pages. So much for putting engaging, valuable content first.

I had an interesting experience last month. The online presence of roller derby in the Netherlands is largely concentrated on Facebook. Games are announced using Facebook event pages. After a game, I share links to my photo albums there, because not every skater is a fan of my page, but they may still be interested in photos of that particular event.

On this occasion, somebody posted a comment to my post on the event page. Usually this takes the form of “thank you” or “nice photos” but I like to check, in case somebody wants a photo removed or says something untoward. In this case, though, I could not view the comment because I could not view the post because Facebook had decided (I assume) that my post was not engaging enough for me.

I could see I had posted that link, because Facebook was still showing it among the three posts in the preview of its Discussion tab (event pages are divided into an About and a Discussion tab). And I could also see that somebody had commented, because Facebook notifies you of new comments. The site however just refused to show me either my post or the comment.

So that was an interesting bit of automated gaslighting. Smarter systems, designed to counter trolls, hide postings from other readers but not from the author, Facebook seemingly does it the other way around.

International ad agency Ogilvy (disclosure: I worked for them in a previous life) wrote a white paper in 2014 in which they outline the everlasting decline of Facebook page reach. Their recommendations are that 1) you focus on sub-sets of your audience so that you can better supply them with engaging stories rather than going for a one size fits all, and 2) that you return to Platform Neutral, e.g. your own website. If you want to control the discussion, you have to control the platform.

I am not sure that is such a good advice, because Google Search is a platform too now (it wasn’t, or not as much, in 2014) and is capturing a lot of visitors before they can reach your site. Also, in the case of the amateur event photographer, Facebook may simply be where your audience is, and you don’t get to move them around.

*) Full disclosure: most events I photograph are so-called double headers, in which two roller derby games are played back-to-back. That means that in those cases my audience actually consists of the players, friends and family of four teams. However, that would have side-tracked you into contemplating the nature of roller derby events in a way that is completely irrelevant for this post, hence the condensation of the situation into a form that is easier to understand.

This entry was posted on Monday, March 26th, 2018 at 7:50 pm and is filed under Lightsmithing, Web design + usability. You can follow any responses to this entry through the RSS feed. You can leave a response, or trackback from your own site.

2 responses to “An anecdotal look at Facebook page reach”