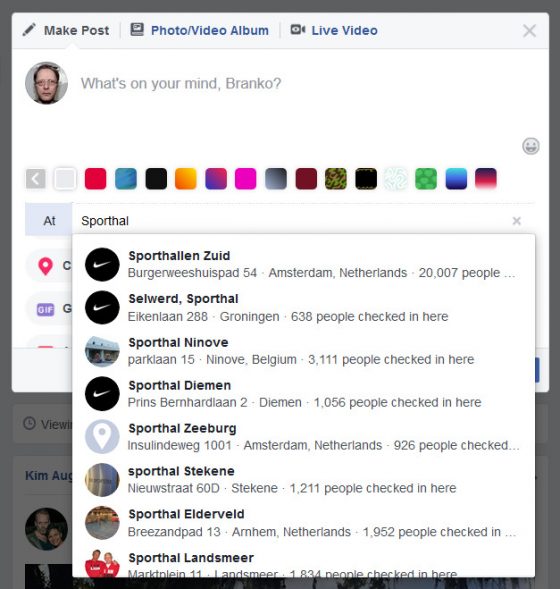 If you check in at a location on Facebook or enter the location for a photo, there is a chance that you will end up linking to spam.

The main reason for this is that Facebook is crap and the people who make Facebook are idiots, but I say this in anger after hacking spam out of my photo albums for 2 hours straight, so I will acknowledge that this is perhaps not the most constructive of explanations. Let me elucidate.

When you try and enter a location in Facebook, the site helpfully offers you a number of suggestions based on the part of the location name you have entered so far. This is not an exhaustive list, i.e. Facebook makes a selection of locations it is going to suggest. If the name of the location is not in the list, you get the option to ‘Just use’ the name you just entered.

In some of Facebooks forms, you get the option to Add Place. This takes you to a new form in which you can enter some information about the place you just added, including its address. Facebook does not remember what you added last time, so if you have to fix hundreds of photos, you have to fill out thousands of fields (hence me just wasting two hours).

But suppose you are a spamming low-life piece of scum (watch your contaminations, Branko!) and you have somehow managed to automate part of this process, you now have found yourself a way to storm the top of the list of location suggestions. At least, that is how I assume this works. It would make little sense for Facebook to suggest obscure locations, so I assume they automatically suggest popular locations, opening them up to attacks by spammers who have the time, the energy and the tools to game this system.

Presumably, the more people like and check in at these scam locations, the more popular these false locations get.

The screenshot illustrates how I have started typing ‘Sporthal’ – Dutch for sports venue – and as you see, Facebook suggests 8 locations. Of those, 3 have been hijacked by spammers, all of which show up in the top 4 (you can tell by the fact they share the same logo).

I have no idea how these scammers manage to hijack locations so completely. They take over both the profile photo and the cover photo and manage to be the only ones to have posting rights. The cover photo seems to be something that a person can suggest for a location, but the other two items aren’t.

I know of at least one location (Sporthal Oranjeplein in The Hague) where there was a somewhat well used, somewhat maintained real location page that was then ‘merged’ with the spam location. Meaning, if you somehow managed to find a link to the original location page and clicked it, Facebook would automatically redirect you to the spam page. In those cases Facebook will helpfully tell you it has merged pages and offer you a way to report an incorrect merge.

This is also useful in cases where locations have been merged with automatically created pages – case in point, links in photo albums leading to Utrecht Disaster (a roller skating hall) now all lead to an auto-generated page about the Heysel Stadium disaster. You can report the mismerge – as useful as pressing a pedestrian crossing call button I imagine.

So what is the problem? Is there a problem? I mean, I hate spammers and all that, but in the end it is my choice to add a location to my photos, and it is my fault if I don’t properly look at the location I add.

The mismerges are problematic in this respect, because I could link to a proper location only to find out years later that the link is now redirecting to spam.

I don’t know of a way to fix this. Facebook does not want to hire people to add and manage locations, so this is always going to be a problem. It could disable locations altogether, but having people share where they have been and what they have done together, happens to be one of its most attractive qualities. Adding the ability to report spam, assuming Facebook would actually follow up on such reports, might help, but I can think of several drawbacks. For one, Facebook (and similar social media services) is known for selectively listening to its users. Why would I report something if I believe they wont listen anyway. The other problem is that this turns the whole battle over locations in one between two powerful factions (Facebook on the one hand, spammers on the other) in which the regular user is less and less likely to be heard.

Facebook’s problem is a conceptual one. It wants locations to be somewhat community managed, but ignores the fact that the community contains many bad actors.

There is a very simple thing they could have done for my specific problem, though. As I am typing the name of the venue where I have taken my photos, progressively less and less suggestions appear. This makes sense in a world where there is only one location called Sporthal Oranjeplein (staying with my previous example), but Facebook knows of several. Would it be too confusing to show more than one?

This entry was posted on Thursday, October 12th, 2017 at 5:48 pm and is filed under Life blog, Web design + usability. You can follow any responses to this entry through the RSS feed. You can leave a response, or trackback from your own site.