In this book former photographer Hans Aarsman tries to deduce the story behind a photograph from the photograph itself.

Hans Aarsman used to be a photographer until he realised that the essence of his job was to mimic old-fashioned paintings. He sold his cameras, gave away his photos to a museum and became somebody who writes about photography instead.

In the national newspaper of record De Volkskrant he got a weekly spread in which he got to play a photo detective. He would study the photos that came off the news wire and select one or a small series to study.

Wat Jij Niet Ziet (With My Little Eye, literally What You Don’t See) is a collection of 50 of these columns and the second book in the series. Each column consists of a spread containing the photo followed by a page that has a crop of an interesting detail, followed by a page describing Aarsman’s findings. 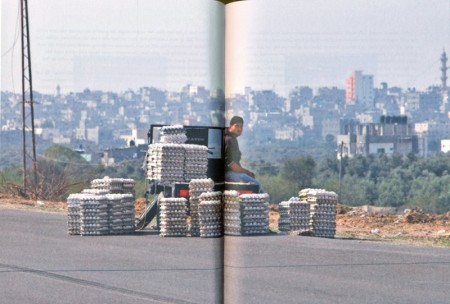 Shown here is a sample of Aarsman’s detective work. On 20 November 2012 Palestinian photo journalist Adel Hana took this picture of an egg salesman just outside Gaza City. AP put it on the wire and accompanied the photo by a description that said something along the lines of ‘man selling eggs by the side of the road’. 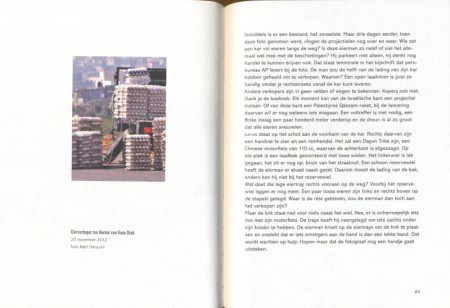 Aarsman had his doubts. The low, open bed of the vehicle forms an ideal platform both for displaying eggs and for selling them from, so why would a salesperson put most of his wares in the street like that? He pulled out his magnifying glass and noticed a tire standing against the truck. So that’s why the man had to unload the truck! He wanted to reach the spare. This salesman isn’t vending, he’s waiting. Why is he waiting when he’s got a spare tire? Well, a couple of crushed egg cartons suggest he had been kneeling on top of them—presumably he tried to remove the tire but had to give up in the end.

Not all the photos required closer inspection. Sometimes it is immediately clear what is going on, but Aarsman still ekes out a few details that lead to a greater understanding. He also included photos that are interesting without requiring detective work, such as the photo taken by politician Reynaldo Dagsa a fraction of a second after a deadly bullet entered his body. Dagsa had been focusing on his wife and daughter who were posing for him in the street, and failed to see or respond to the gunman appearing next to them.

Being a bit of an aspiring amateur photographer I find this approach very refreshing. It helps me understand what makes a scene, how subject and background work together to tell a story.

This entry was posted on Sunday, August 3rd, 2014 at 10:46 am and is filed under books, Lightsmithing, Review. You can follow any responses to this entry through the RSS feed. You can leave a response, or trackback from your own site.