In which the author toys with his conscience (but not really) 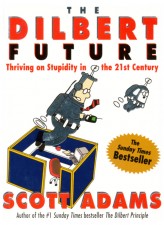 Here’s the obligatory blurb that can be misquoted by publisher and author alike: The Dilbert Future is worth every penny I paid for it.

As far as I remember, I did not pay any pennies for this third instalment of Scott Adam’s comic ‘business books’ because I paid in Euro cents and not even that many. I bought the book second hand at a flea market and I probably did not pay more than 50 cents for it.

Can an author be separated from his work? No really, could somebody separate this author from his work? That is like the second lame joke I made in this review and yet I stay ahead of the work under review. Unfortunately my opinion is informed by what I’ve learned by the author.

In 1996 Adams published the rather brilliant The Dilbert Principle, a satirical work about the workplace in which he presented a twist on the Peter Principle. The Peter Principle humorously states that good workers will be promoted into roles they cannot handle until they reach their ‘level of incompetence’. The Dilbert Principle states that bad workers will be promoted to get them out of the way.

Only one year later Adams published The Dilbert Future, but I did not read it until the past weeks. In the meantime I had learned that he is a bit of a tosser and a moron and a misogynist—the red pill brigade call him “one of us”.

So here’s my take on if, why and how to appreciate a work even if you dislike the person behind that work. Usually these questions are discussed from a moral perspective—we don’t like to be in the closet about the works we admire even if their authors are personae non gratae. Unfortunately, I don’t think it is possible to will yourself to not like a work just because of its author.

Complicating matters is that good and better works often work because the author shows real and continuous insight. Go ahead, hate Wagner because he was a Nazi, but that doesn’t make his music less intrinsically good.

But there is a third issue and that is that insight is often based on context. A joke works because it makes use of a lot of shorthand; the concepts that underlie the joke are shared by the person telling the joke and their audience.

This is where The Dilbert Future comes crashing down.

The very first lines of the book are: “There are two types of people in the world: the bright and attractive people like yourself who read Dilbert books, and the 6 billion idiots who get in our way. […] A devious reader suggested calling them In-duh-viduals.” See? That’s funny. It’s a classic joke that works on the understanding that both Adams and his readers don’t really believe in a world divided into a small elite of brilliant people and a large mass of complete idiots. After all, each of us knows quite a few people who may not have read Dilbert but are still definitely not idiots. There is a contrast between reality and what Adams jokingly says reality is and that is what makes us laugh.

Unfortunately the corner that Adams has painted himself into, in blog posts, books and by writing sock-puppet reviews of his own works, is that he believes exactly that. Adams belongs to a group of people who believe there are wolves and sheep, and they are the wolves, that there are hunters and prey, and they are the hunters. As far as I can tell, Scott Adams believes his own nonsense. And that makes it quite a struggle to get through The Dilbert Future. Every time you see Adams joke about these In-duh-viduals you know he doesn’t mean it as a joke. Which is a bit of a problem for a book that is meant to be funny.

I’ll skip discussing the bit at the end where Adams gets all serious and starts professing his belief in NLP-like mumbo jumbo.

All this just to say that you may not be able to force yourself to dislike the things you like, but an author is also unable to divorce their work from what the reader knows about the author.

I skipped the rating on this book because even though I didn’t like the book, I don’t think I could recommend you either to read it or to leave it. If you’re a sad-sack red-piller, you might even consider it a work of literature (or worse, a manual).

This entry was posted on Saturday, June 7th, 2014 at 4:10 pm and is filed under books, Review. You can follow any responses to this entry through the RSS feed. You can leave a response, or trackback from your own site.