This week in racism

Here in the Netherlands we have a venerable, somewhat quaint but altogether rather innocent tradition involving a gift-giving immortal bishop called Saint Nicholas, who has a rather unfortunate side-kick called Black Peter.

Black Peter is unfortunate because of his appearance which has been closely modeled on certain racist caricatures of black people. He has black curly hair, big red lips and golden earrings, speaks with a broken accent and often plays the fool. Recently this side of our tradition has been causing a lot of friction, and this week we appear to be going through what I would like to call The Coming Out of the Racists.

Now Heukeroth, who seems to lack talent or sophistication along pretty much every axis you might care to investigate, has made a career out of insulting people. Together with singer Gerard Joling he made a TV series in which they kept bitching each other out, so maybe he was just being in character here.

On a more personal level, a black acquaintance went to an anti-Black Peter demonstration, and one of the first things happening to her was that somebody walked up to her and said “die, nigger” to her. 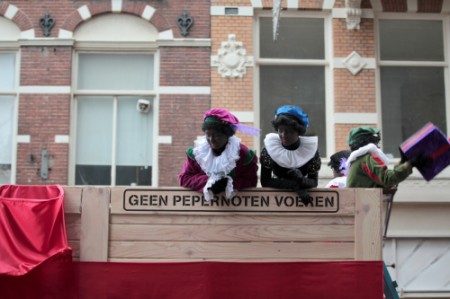 This entry was posted on Thursday, November 21st, 2013 at 8:43 pm and is filed under General. You can follow any responses to this entry through the RSS feed. You can leave a response, or trackback from your own site.

2 responses to “This week in racism”