A long time ago in a land far, far away I had a game called Caesar III installed on Windows 98 (or XP). Actually it wasn’t that long time ago, and it definitely was not far away. But I digress.

And lo, I bought a new PC which ran on Windows 7, and forgot all about Caesar III. Until I cleaned out a cupboard and the found the game again. Long story short, Caesar III refused to install. It would prepare for running Installshield, and then do nothing.

I scoured the internet for solutions, but nothing gave. Most people apparently happily installed their third Caesars on Vista and 7.

So here’s the trick I used: I just waited a long time. Apparently Installshield needed that. After a minute of five or ten, out of the blue Installshield started running.

(Note that you need to run set-up in compatibility mode.)

The Windows 7 PC has been replaced by a Windows 10 PC a couple of months back and I decided to dust off ye olde Caesar III again.

And lo, the same problem occurred during installation. The setup.exe just sat there and it looked like I would have to wait a bit again. But being slightly less patient this time around, I decided to do some random prodding of the system.

After cranking up the priority of the setup process (which frankly didn’t seem to do anything), I started clicking around in the Resource Monitor to see if setup was stuck on a particular resource. That’s when I stumbled on a very promising menu called “Analyze Wait Chain…”. So I clicked it, and the resulting dialog said that setup was waiting for another program, one I wasn’t even aware was running – it did not show in the task bar, for one thing. I terminated the process that was holding up setup.exe and the latter immediately went to work on installing the game.

I don’t know why a crashed program (I imagine that is what it was) would hold up the installation of ancient software, but there you have it. Nor do I know why waiting helps – I guess Windows does some sort of garbage collection?

So if you want to repeat the process, simply type Resource Monitor in the Windows 10 search, start the program, look up setup.exe, right click, choose Analyse Wait Chain and see if there are other programs listed in the resulting dialog. If you know what you are doing (and feel safe in doing it), you can click the checkbox next to the offending program and then click the End Process button.

Note that if you do this, precious work may be lost. That would be on you. Don’t terminate processes you don’t know.

Here’s a mockup of a screenshot of the resource monitor to get you going: 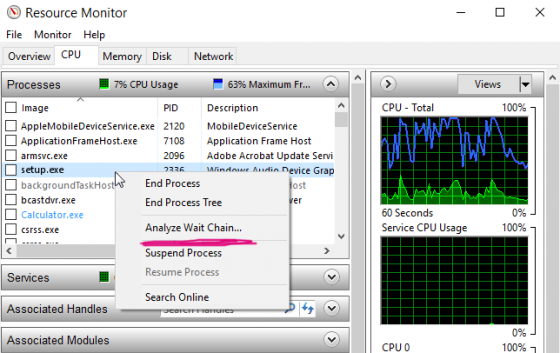 Something similar may work with Windows 7, but since I no longer use Windows 7, I cannot say for sure.

This entry was posted on Friday, October 28th, 2011 at 11:51 pm and is filed under General. You can follow any responses to this entry through the RSS 2.0 feed. You can leave a response, or trackback from your own site.