Rules that have been basic tenets of society for centuries 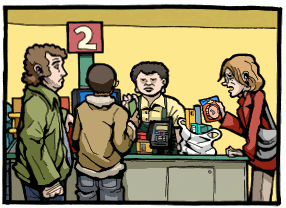 So there I was at the 24-hour grocery story getting whatever sketchy garbage it is that I eat, and only one checkout was open. So there was kind of a line, and as I’m on deck to pay for my stuff I notice there is this woman just pleading with the cashier. She is trying to get a refund for something, it is late, and she is desperate, but she is heroically polite about it. And the cashier is just giving her nothing, just turned away mumbling some bullshit quasi-excuse about how she can’t, how she has to serve the people in line first.

When I read this comic last week, at first I merely thought Winston Rowntree was back on the ball after a run of weaker (while sappy) strips. This one was good.

But when I came back to read the comments to this really rather simple set-up (a cashier, a woman trying to return a product, and the next shopper in line), I realized that this strip is not merely good, Rowntree has hit the ball out of the park.

This entry was posted on Saturday, March 27th, 2010 at 6:13 pm and is filed under Link blog. You can follow any responses to this entry through the RSS 2.0 feed. You can leave a response, or trackback from your own site.