In the early nineties I helped write a couple of Sjors & Sjimmie comics. Sjors is a Dutch phonetic way of writing George; but the character is a spin-off from Perry Winkle, the adopted Buster Brown-like little brother of Winnie Winkle the Breadwinner.

I am still going through some of my old stuff to determine what can be thrown out and what needs to stay in this packrattian palace, and yesterday I came across the first page of a plot that never fully developed. I believe my co-conspirator here was Paul Hoogma. The guy with the elbow-action in the picture below (click it for the full page) is Sjors; I cannot tell you who the other guy is, because he is not in the legal public domain yet. 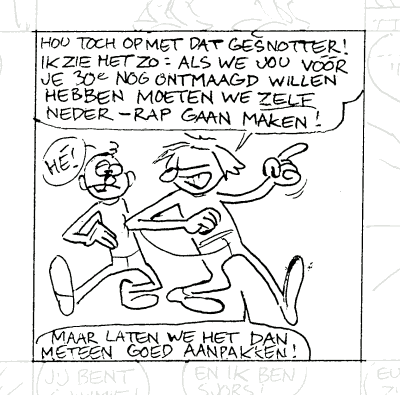 The strip was going to have Sjors and his homey become rappers, but it wasn’t much developed beyond that. We were just riffing on a theme we felt might go over well with our audience — I know, art can be brutally commercial when you peel away its thin veneer. The full page contains a number of childish jokes, but I like it that way. It’s half the fun of seeing such a work in progress, and you can tell which panels were going to be replaced in the final version. I remember that I was nervous about the quality of the raps, and that may have been the reason why I could not come up with the ideas to finish the story. Although the more likely reason for that is that we did not have a single idea of the overall story line. In hindsight I don’t think the quality of the rap would have mattered much; ultimately it’s the story that counts.

This entry was posted on Tuesday, October 9th, 2007 at 2:54 pm and is filed under Life blog. You can follow any responses to this entry through the RSS feed. You can leave a response, or trackback from your own site.