A very bleak winter day in Castricum yesterday, where we went hiking. Just a short walk; after 90 minutes it turned out we had only travelled 5 kilometers, so we decided to go for the short 11 kilometer route instead of the longer 18 kilometer one. This way we avoided tramping through a forest in the dark (which if I remember correctly can be a lot of fun, but just something I wasn’t in the mood for).

There is a wooded area between the village of Castricum and the dunes that consists of both evergreens and decidious trees. I shot some 65 photos, most of which I consider failures. My brother doesn’t like the winter time for photography; he says the bleak light makes everything look flat. Though that is true of course, I see that more as a challenge (plus I like restraints). My problem is that I don’t know what’s beautiful, and that I stlll need to learn how to work a camera. And that I need to develop my own aesthetic. (Being the son of two photographers and the brother of a videographer that makes me somewhat of a black sheep.)

Initially I wanted to leave out this first photo because it was extremely out of focus. But I do like everthing else about it — the colours, the composition, the foreground, the background, and especially the dynamic of the two hikers — so I decided to unsharp mask it to the extreme. I also stretched up the values; in doing so I killed some nice contrasts, but I also brought out the foreground, which I thought more important. 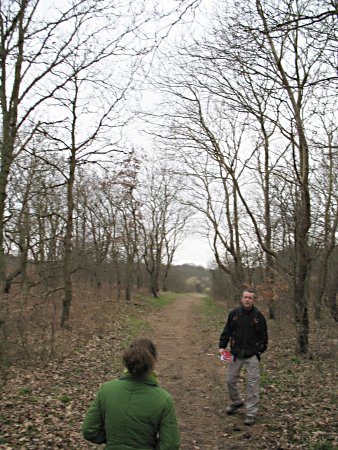 The first photo was taken with the camera held high up above my head. After a month or two of using the Canon Powershot A620 it seems that its tiny lens (7 mm) makes it little better than your average fixed-focus disposabe camera. What does set it apart though is its swivelling LCD screen, which makes it much easier to take photos like this (assuming you don’t have anything to stand on), or photos from close to ground (if you don’t want to get your clothes dirty). I believe the entire 600-series has this feature. I am not sure if it’s worth buying a Powershot 6xx for this reason alone though; I bought mine because it is one of the few digital pocket cameras that can be pc controlled, which I need to make pack shots. The 6xxs are typically 150% of the price of the otherwise equally capable 5xx series (Natasha uses the 540, that’s how I know). 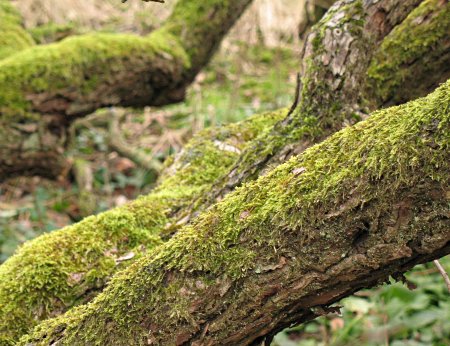 I only include it here because the texture is pretty (and this much saturation in the winter makes the moss seem to come from outer space). The photo is cropped to get rid of some twigs in the foreground, but otherwise uncorrected.

After the first 90 minutes we sat down for tea and snacks at some picknick tables that were lining a lake. You can well see how dreary the weather is. I took a couple of unexciting pictures of the lake, and I would have excluded them all if it weren’t for this family of humans that wandered in front of my lens. 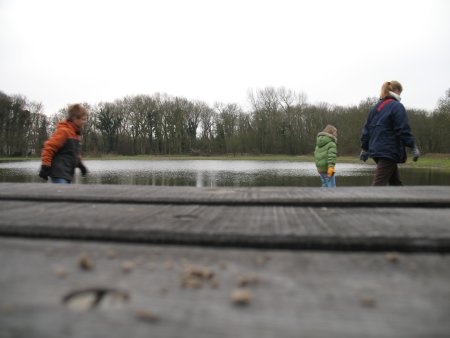 The next photo is included purely because of all the terrific detail — scaling it down from 2200×1500 really doesn’t do it justice, I am afraid. It is slightly blurry because the camera decided to autofocus on a sprig of wood splinters sticking out in the bottom left corner. 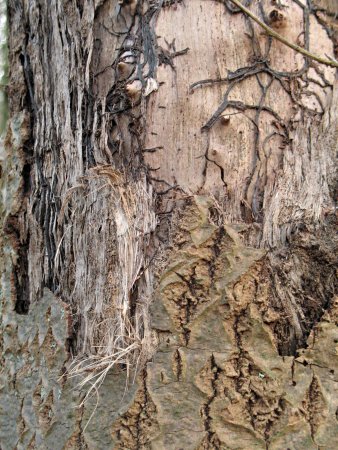 In case you are wondering, this is the trunk of a tree with a chunk of bark missing.

Again, I wasn’t going to include the next photo, but this one I needed to make a point, namely that a lot of the trees we saw were extremely bent and curved and twisted. Castricum must be the capital of twisted trees in North Holland. A lot of photos I took of such trees did not come out very well, because the subjects tended to blend into the background. 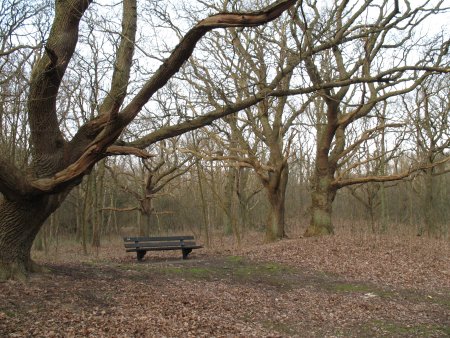 This entry was posted on Monday, February 19th, 2007 at 12:48 pm and is filed under Life blog, Lightsmithing. You can follow any responses to this entry through the RSS 2.0 feed. You can leave a response, or trackback from your own site.