Items from when I was younger

In 2000 I moved from my place of study, Nijmegen, to Amsterdam. Since renting a 1,000 foot place in ‘the province’ (as they say here) is about as expensive as renting a shoebox in Amsterdam, I had to leave a lot of stuff behind. I gave away a vanful to students (my piano, my sofas, my kitchen table and all the trash that I could get away with — that is, that they were too embarassed to refuse). Another vanful went to the city dump — including, as it turned out last Friday, my favourite wicker bucket chair. One and a half van went to a storage facility in Nijmegen, including my book cases, my books, my superfluous computing equipment, clothing, magazines, the left overs of three decades of schooling and my golf set. And finally I took about two bags of clothing and whatever I felt would be useful for my fledgling freelance business (which at that point I wasn’t aware I was going to start) with me to Amsterdam.

Since a year or so I have a little more breathing space (still no thousand feet of course), and so decided to clear out my rent-some-storage. I enjoy record-breaking gaps between taking a decision and acting upon it, and so it wasn’t until my youngest brother decided to kick my butt two weeks ago that I actually did something. Last week I picked a date with him, and last Friday we hired a bigger van and went to collect my stuff.

Rummaging through it all I found three items that other folks would have thrown away a long time ago.

The first one is a time machine. You can tell by its metallic look that there must be something futuristic about it. (Obviously a design error.) I read of its principle in a collection of short science fiction stories: the device moves the entire universe to an arbitrary point in the future or the past. My implementation is really quite sophisticated. To this day I am astounded by the fact I managed to engineer it. Basically, the device can read your mind; and once you have settled upon a point in the future or past, it transports you there, and with you the rest of the universe.

The yellow knob controls a cursor with which you have to touch a static point on the view screen. This serves two purposes: one is to focus your mind on the matter at hand, and the other to set in motion the journey through time. There is some underlying psychological principle to the mind-focussing that I forgot about. It is important to concentrate, so that you do not travel to the wrong point in time.

As to how the time travel mechanism and mind-reading mechanism work, I am afraid I am not at liberty to tell. 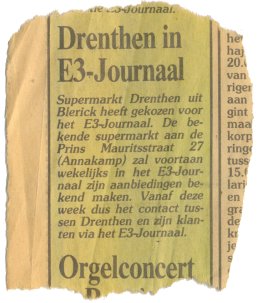 The second item is a news paper clipping that for all I care could replace the definition of irony in the dictionary. It is strong stuff, so if you are not used to irony, try out something lighter first, like election results.

This text is clipped from a free local news paper of the kind that is half advertorial, half advert. Often the editors at least try to give the advertorial the semblance of actual journalism, but this time they could not be bothered:

(This was posted on the front page of the E3 Journal, although you could probably tell from the fact that that is where super market Drenthen advertises.)

The third and last item is a poem, one of a few original texts in a language called Nadereitas, as spoken in Nadereit. I had seen a television item on geofiction, and was fascinated by the idea. As is often the case with me the fascination subsided rather rappidly, but by that time I had devised a language, a geography, a flag, a capital, a religion, and so on. The poem is incomplete, but I guess you can still fathom of what it is a translation, even though it is based on the Dutch version of the English original:

All three items must be dated somewhere during my time in high school. In hind-sight I’d like to think early high-school, but for instance the handwriting of my geofiction, and the fact that I threw together elements of French, German, Latin, English and Dutch for Nadereitas would suggest I was at least fifteen. Yes I was a nerd even back then.

This entry was posted on Sunday, December 3rd, 2006 at 2:46 pm and is filed under Life blog. You can follow any responses to this entry through the RSS 2.0 feed. You can leave a response, or trackback from your own site.

One response to “Items from when I was younger”