The Man Without a Past

I started watching this film three times. Half an hour into the third time, I noticed something odd. A quick look at the DVD box confirmed my suspicions: this is a comedy.

A man takes the train to the big city, where he gets mugged by thugs. They leave him to die in a puddle of his own blood, but he miraculously survives. But he loses his memory in the process of being mugged. The movie explores how he tries to build a new life for himself, something that is hindered by the fact that modern society requires you to have a registered identity. The MWAP doesn’t seem to let modern society get in his way too much.

The film is very slow paced, even for European standards. The humor is mostly absurdist:

MWAP: I went to the moon.

Irma: How was it?

MWAP: There was no-one there. It was a Sunday.

Irma: Why did you come back?

MWAP: I had things to do.

The director’s introduction on the DVD box might give you some insight too (warning, translation of a translation):

My last film was in black and white, and without sound. This made clear I meant business. Had I continued along that track, my next project would have required me to skip the movie itself. What would have been left; a shadow. Therefore, always ready to compromise, I decided to add dialogue, and colour to this film, and other commercial values.

I must admit that subconsciously I had hoped that taking this step would make me seem normal too. Hopefully my social, economical and political view on the state of society, on morality and on love are clear from this movie. 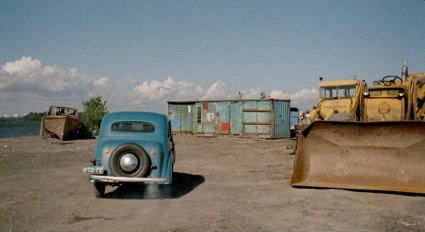 Screen capture: the new home of the Man Without a Past.

Perhaps the most striking thing about The Man Without A Past is its styling. The director and his team went to great lengths to make a pretty movie. This is important, because this is the sort of film where you’ll be looking at the scenery, waiting for the story to continue. In this respect you can compare it to road movies, although the MWAP stays firmly in one place. A city’s dock-, wet-, and brownlands are capable of producing their own vistas.

Lucky for me; I agreed with the makers about what is pretty, and what is good. Tip: before you rent or watch this film, view some screenshots or trailers.

The Man Without a Past (orig. Mies vailla menneisyyttä, 2002) by Aki Kaurismäki, 3.0 stars

Review of The Man Without a Past published on Oct 27, 2006 by Branko Collin.

This entry was posted on Friday, October 27th, 2006 at 12:38 am and is filed under movies, Review. You can follow any responses to this entry through the RSS feed. You can leave a response, or trackback from your own site.