On December 31 last year (yes, I know, I am late) the Planetary Society, or rather its head blogger Emily Lakdawalla, posted it’s Year in Pictures, photos resulting from the exploration of our solar system. Apparently our ability to photograph or videotape space is becoming greater and greater, because there are some real beauts in there, from the continent that Huygens landed on to the Deep Impact video, from our newest (discovered) planet to the spongy surface of Hyperion.

And there probably wasn’t room for everything, as I seem to be missing the photo ESA took of what looks suspiciously like water on Mars. 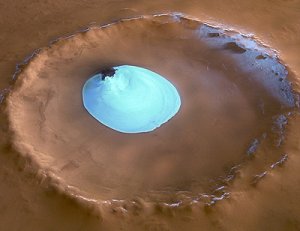 Photo credit: ESA
Photo of a crater made by ESA’s Mars Express, published 28 July 2005. The crater is located on Vastitas Borealis, a broad plain near Mars’ north pole. It is approximately 35 kilometers wide and the height measured from its floor to the top of the rim is approximately 2 km.

Of course this is just the space stuff that the Planetary Society concerns itself with. Last year also produced photos of a mock-up of the new Russian space shuttle Kliper, and of the Firefox star cluster (it’s not actually called that, but I find the name I gave it much better).

It’s incredible how much we learned about space in just the last year.

P.S. I cheated. The Firefox star cluster is from 2004. But I only cheated because I wanted to, not because 2005 needs it. Because it doesn’t.

P.P.S. The photo of the crater was made by Mars Express, not the crater itself.

This entry was posted on Wednesday, January 11th, 2006 at 4:26 am and is filed under Ooh! Aaah!. You can follow any responses to this entry through the RSS 2.0 feed. You can leave a response, or trackback from your own site.